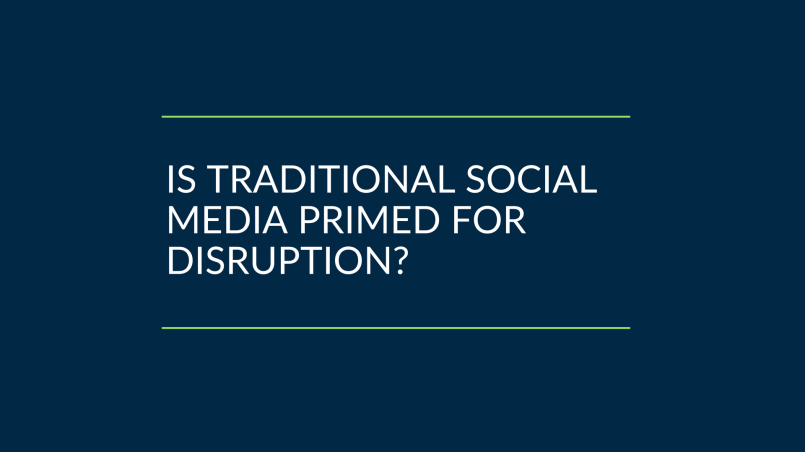 Today's post will be a bit different to what you may be used to from me, its a little bit of an observation piece and my view on where social media is going. Sometimes you simply need to write for yourself and hope it reaches like-minded people instead of writing for traffic and hopefully it stirs up some debate. We create enough posts designed to help answer peoples questions, and Google rewards us daily for this. So let's take a break from the gamification, the visits, the conversion rates and the leads and have some real talk for a bit.

Like most millennials, I've been interacting on social media for some time now, firstly in a personal capacity and then in a professional one, so I've seen both sides of these platforms and watched them morph into something very few expected in the early days. What started as a fun way to share your thoughts, memories and interests with your immediate circles has grown into a mass communication tool that disseminates information more rapidly than has ever been seen in the history of the human race.

We're getting so much information, so fast our minds can bearly keep up, and this constant and instant pushing out of content has turned social media platforms like Facebook, YouTube, Instagram, Twitter and the rest into the new mass media outlets. Forget TV, forget radio, forget print media their influence has dwindled in recent years by digital/social media and as this medium continues to disrupt it's essentially beginning to absorb the characteristics of its predecessors.

What made social media so infectious was the concept of exploring content without having to actively know what we're looking for. While Google does a bang-up job of categorizing the internet for us if I don't know what I'm looking for how will I find it? This is where social media came in, it allowed you to create a customised feed of content from your friends, groups, projects, interests and brands you were interested in and in the beginning it worked amazingly well, it was like StumbleUpon on steroids and if you produced unrelated content I could remove you from my feed and had full control over what I wanted to see.

As we got hooked on this new form of digital media, got our friends involved and started contributing and sharing content the user numbers skyrocketed to a point where the party was now over. It was time to start making money and our feeds became prime real estate, algorithms took over and decided for us what we should see. Instead of us serving us content, it becomes them serving content us, (see where fake news could spread from this sort of shift?) Competition for attention became fierce and you can optimise your posts to the best of your ability if you're not putting cash behind it, doing targetting, remarketing or the very least being obnoxiously consistent with pushing out mediocre content every day you're simply not going to be seen.

So where does that leave the rest of us? Well with nothing, no views, no engagement, no sales and no hope! I've seen many bloggers and small businesses give up because social wasn't working for them. They were not about to give in to the gamification in order to find validation in the platform and cut their losses which is a shame, it shouldn't have to be like that. Our site, for example, gets very little traction on social media, not that we put in a lot of effort but if 90% of my visitors are hitting Google searching for content and actively finding us, there should be a reasonable amount of people using social media who would be keen on our content. I'm sure they are, they've just been kept in the dark by the current policies governing the real estate.

For brands and businesses

This fundamental shift in the use of social media has simply seen brands and big business shift more of their advertising spend on social media rather than traditional media. Brands were always going to spend on mass reach advertising, be it display, billboards, events, TV, Radio anything that reaches more people social media has just become another channel in their mix and suits their style of marketing perfectly.

For smaller companies yeah well you can grind and squeeze out a few leads here and there, but it's not going to get you very far. The effort and spend hardly warrants the rewards lately, especially if you're starting from scratch.

Before I move on from this point I have an honourable mention here: One place I've found on Facebook where there is still a bit of the old spirit of social media, are Facebook groups. People have created little digital societies within Facebook groups and engaged with one another regularly on interests, news, trading and sales whatever they feel, and they govern that area with an iron fist.

As social media tries to portray itself as still an authentic medium for everyone to get involved in we've seen the rise of influencers and influencer marketing. These are social media super users who have build up an audience based on their interests and generating daily content, that's well, safe to say mediocre at best. They understand the game; they push out content that is designed to get views, likes and surface engagement. Once they reach a certain level, like a certain number of followers its time to monetise and they sell this potential reach that supposedly authentic, to brands.

I honestly have no problem with this type of business, and I'm happy people are finding ways to use the internet to make money, there are some real authentic micro influencers out there that I engage with personally and love their content.

My only issue with this is that its still one-way communication, as soon as influencers move up in the ranks, they lose all sense of community and its all about remaining relevant, servicing your audience, getting views, mainly mass reach and appeal, it eventually loses its authenticity with time.

In my mind, social media is a place that was supposed to allow us to create communities based on interests and geographical location to foster the exchange of ideas, concepts, information and naturally do some businesses between one another. Creating a place where you can speak to your audience, and anyone who wants joins in may do so simply by having an account.

To me, it seems like these platforms have lost that spirit and the ability to consistently make real connections between people. I do not doubt that it does, due to its sheer scale but if we took it as an overall percentage im sure, it's pretty low. This is why people with a real commitment to a certain topic are still found on local message boards, interest forums and subreddits where they have control and can reach out to like-minded people. Traditional social media has been reduced to surface engagement that offers no real value.

We talk about bots being the problem on these platforms, but most of the engagement has been reduced to a quick like, a tagging of a friend, an emoji or a completely meaningless comment which echoes Paris Hilton in the early 2000's, "That's hot"! Have you ever tried to type a meaningful well thought out comment on a social media platform lately? Let's say 4 or 5 lines worth? I have and guess what?

I receive the same response as I would if I put down a simple emoji, nothing or perhaps ! So what's the point of sharing your opinion? Users on traditional social media don't want to engage in discourse, the game is about views, and then you move on! Just view me, like it and move on so I can monetize this.

An opportunity to disrupt

As traditional social media becomes the new mass media I see an opportunity for disruption. These once hailed platforms are now too big and too busy focusing on their bottom line to care about the next trend, they're too busy riding this one.

This is why I see the opportunity for a platform that offers users the ability to create, curate and share content; foster meaningful connections will be gobbled up by those who have now been made outliers by traditional social media. Give them a platform that is essentially become a marketplace for ideas, concepts and trade where users have the majority of the control will become the next Billion Dollar company.

Let's engage for once

I'd love to hear your opinion on what trends you've seen on traditional social media. Do you think we've grown tired of it? Do you think the space on the internet that we were told was reserved for us is continuously being sold off piece by piece to corporates? Is social media beginning to marginalise the little guy? Let me know, in the comments below!