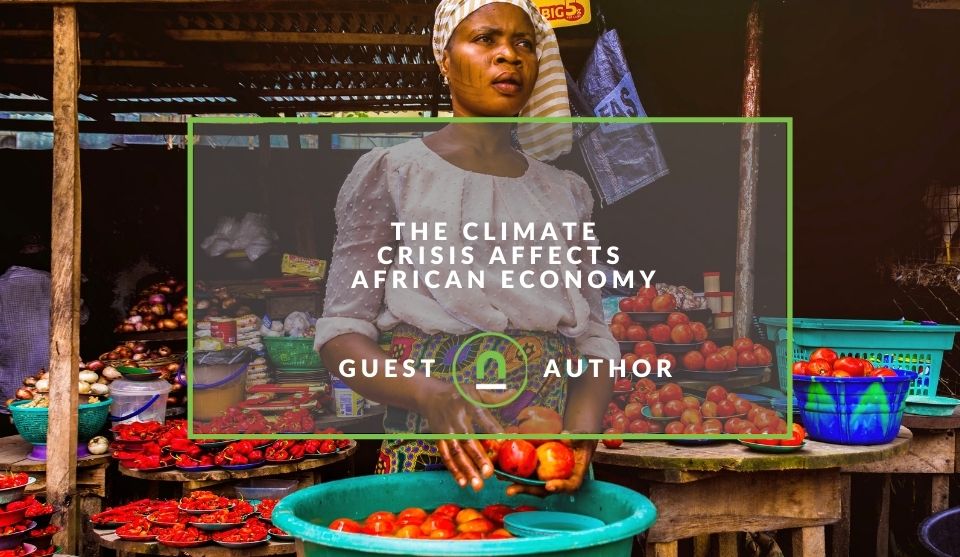 African countries would suffer from climate change with the highest impact on the poorest and most vulnerable. Extreme weather changes are adversely affecting the rainfed farm on which 60-80% of African labourers rely. Droughts and desertification also force nomadic herders to migrate further south, therefore increasing the probability of violent conflicts with farming populations.

The growing momentum of global power climate action has consequences for the African economy, not all of which are good.

Similarly, NGOs are forced to replenish investment in petroleum and gas projects in Europe by business banks. For example, the $3.5 billion East African Crude Oil Pipeline that runs through Tanzania and Uganda still struggles to get investors.

Well-meant, but sudden termination of global power and financial investment of oil and gas might unintentionally damage African economies that export petroleum resources.

Take, for example, the more than 10 African countries that produce at least 25% of their oil and gas exports. According to Carbon Tracker predictions, a rapid decrease in government funding for public and private sector projects, together with a sustained decline in global demand, may cut government oil- and gas income in some African nations by up to 50% by 2040.

The effects of the hydrocarbon industry.

While the hydrocarbon industry is not labour-intensive and typically a minor part of the economy of producers, it generates public service-funded income, wages paid by public servants, and supports small companies. In Africa, this is important because, in over 25 African nations, whose tax receipts are less than 15% of GDP, these vital monies are not being replaced readily.

This doesn't mean that wide and fast climate action will be entirely detrimental to the economy of Africa. New types of renewable energy technology from 19 nations in Africa might have a reverse effect: growing money flows in mining projects and the increasing need for essential raw materials or "climate minerals" needed by electric car batteries, solar panels, and turbines.

These resources include graphite and manganese from Guinea, cobalt and nickel from the Democratic Republic of the Congo, copper from Zambia, the metal group of South Africa, and lithium reserves from the Sahel.

In reality, increased demand for climate minerals might soon begin a new super-cycle of commodities. However, the pathologies of past commodities booms are widely reproduced, which feed clean energy technology that powers affluent economies due to the environmental destruction connected with climatic mineral exploitation in impoverished nations.

Significance of economic diversification for Africa.

African nations must prioritize economic diversification in order to prevent the unexpected consequences of global climate action. However, little understanding exists on the implications of economic diversity and how that definition impacts the policy alternatives offered to policymakers.

A new Carnegie Africa study, according to African Forex trading brokers, implies that overcoming this gap in knowledge to define the issue to diversify African economies and put it into context is essential.

Economic diversification means a move away from the dependency in the economy on certain commodities or industries, such as crude oil, minerals, and agriculture.

Economic diversification has three apparent characteristics closely related to the process of structural change from the lower to higher productivity sectors:

The importance of fiscal diversification.

More generally, fiscal diversification may play a key role in assisting in catalyzing the growth of business in certain industries as part of fiscal policy.

The fiscal policy offers urgent liquidity to the economy during economic crises – as we've seen with trillions of dollars of stimulus being pumped into international economies to cope with Covid-19's economic shock.

The affluent nations are utilizing fiscal tools as industrial strategies in order to shift their economy towards the net-zero carbon future through investment in ED tax stations and carbon tax, subvention, tax cuts, and research grants for clean energy sectors.

The commitment to targeting almost $300 trillion in investments in technology, development, and infrastructure to position the US economy in low-carbon conditions and compete with China is one of the five pillars of the newly revealed US government-industry plan.

In this 10th year, African nations have a chance to diversify their economy in order to develop resilience to the shock of a strong fall in hydrocarbon demand and climatic mineral exploitation pathologies (for mineral-rich countries).

For climate action to take advantage of time, policymakers must first identify what a diversified economy is all about under the particular conditions of their nation and then use fiscal policy to achieve that goal.

African nations may reasonably aspire with robust and diverse economies not to recreate dependence and pathologies in the age of fossil fuels, creates new economic possibilities, and isolates them from international vagaries.

Climate change is recognized as a key development problem by the African Agenda 2063, finalized in 2013.

The Paris Agreement has been the principal mechanism for guiding policy responses in relation to climate changes since 2015. Nationally determined contributions (NDCs). Africa has presented its initial NDC, and they are currently presenting revised NDCs by 2020. African nations are now presenting revised NDCs.

The regions with the greatest capacity gaps in respect of climate services are Africa and small island developing nations. The least established terrestrial observation network in all continents is also in Africa.

The global climate agenda has been driven by major efforts by Africa. The very high ratification levels of the Paris Agreement show that this is more than 90%. Many African countries have undertaken a very short period of time to switch to green energy. For instance, in almost 70% of African NDCs, clean energy and agriculture are given priority. This aim must be an intrinsic element of the priorities of the continent's economic growth.

The promotion of socio-economic growth, particularly in the agricultural sector, is one viable method throughout the continent to minimize climate-related risks and severe effects. Value-adding techniques that use efficient and reliable energy sources are reported to reduce poverty by between 2 and 4 times as quickly as growth in any other sector in this sector, which employs 60% of the population in Africa.

For example, efficient solar micro-irrigation increases farm revenue by between 5 and 10 times, improves yields by up to 300%, and reduces water use by up to 90% while, by producing up to 250 kW clean energy, simultaneously compensates for carbon emissions.

Women make up a major share of the world's impoverished, and around half of the world's women are involved in agriculture – that ratio is 60 % in developing nations and 70% in poor income and food-deficit countries.

Therefore, it is particularly beneficial for women to reduce poverty through expansion in the African agriculture sector. It may also be the case that, in certain situations, women may not have access to weather/climate services; in order to increase their individual resilience and adaptability, all people must have access to these services.

In regions with generally hot climates, where an overwhelming number of low-income nations are situated, the International Monetary Fund states that severe climate-change impacts are being concentrated.

As a result of an increase in the world temperature, the African Climate Policy Centre plans to drop Gross Domestic Product in the five African subregions significantly. The continent's total GDP is predicted to fall by 2.25% to 12.12$ in the case of a scenario ranging from 1 to 4°C increase of global temperatures relative to pre-industrial levels. Africa's unfavourable impact is higher than in South Africa, Central, and East Africa.